Inauguration of “The Centre for the Preservation and Protection of Cultural Heritage”, (CPCH on October 14, 2019) 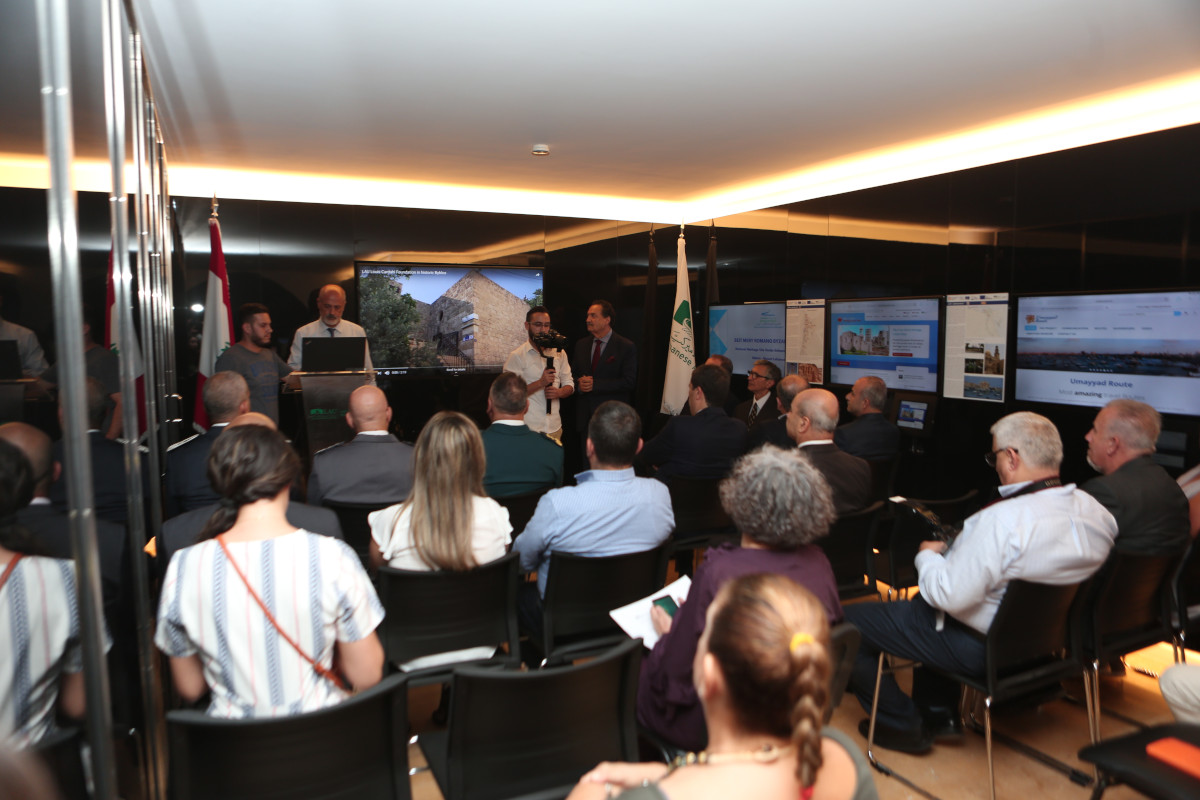 The new Centre aims to become a landmark in Lebanon to promote and support local, national and international policies for the implementation of the UNESCO Cultural Conventions and especially the (1954) Hague Convention for the Protection of Cultural Property in the Event of Armed Conflict, its two additional Protocols (1954 and 1999), as well as the correlated international humanitarian law.

The inauguration of the CPCH represents a step forward in the creation of a participatory model for the protection of cultural heritage at risk advocated both within the 1999 Second Protocol to the Hague Convention and within the Sendai Framework for Disasters Risk Reduction 2015-2030.

Aware of the immense cultural, social and economic value acquired by Natural and Cultural Heritage, with the establishment of the CPCH the Foundation aims to contribute to the construction in Lebanon of innovative models of Civil Military Cooperation for the sustainable protection of natural and cultural heritage as central  factor for a good territorial  Governance. A broad cooperation that involves all the main stakeholders in the country including the National Committee of the Red Cross, the Civil Defence and the National Committee of the Blue Shield, which is the referent NGO created within the framework of the 1999 Second Protocol to the Hague Convention. 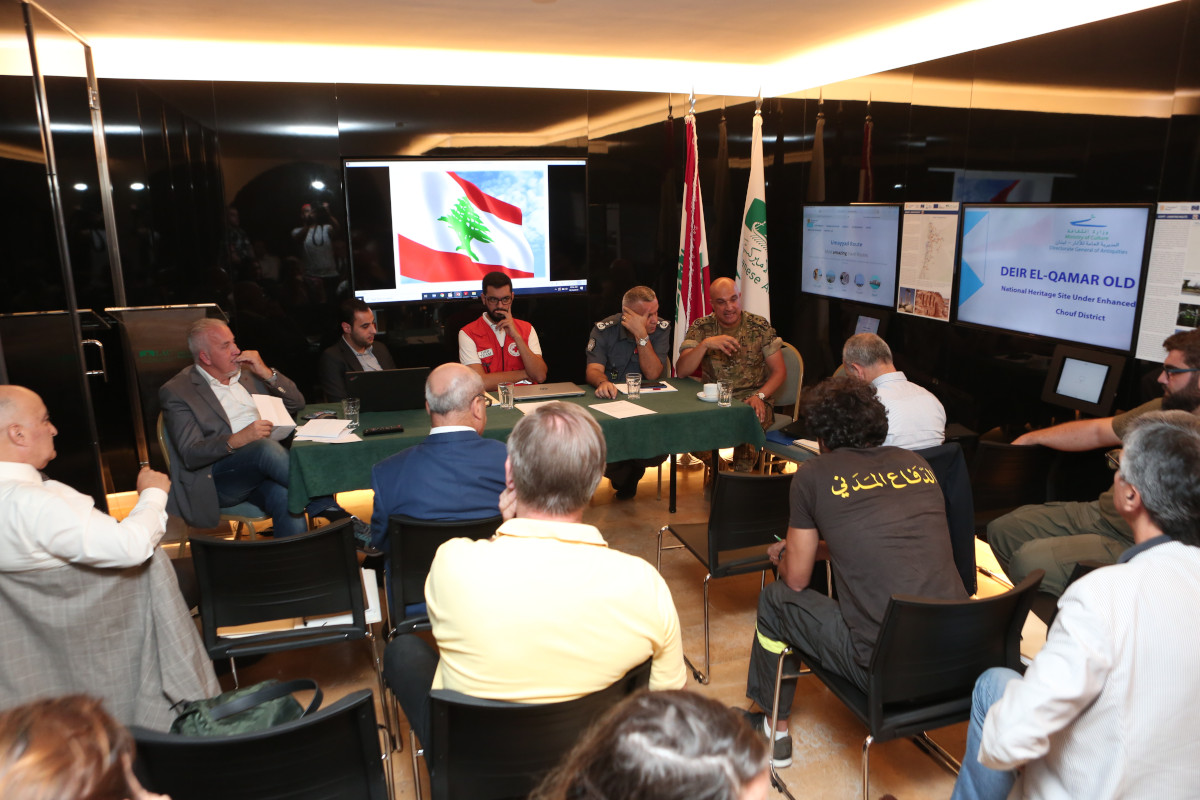 The inaugural ceremony was attended by the Director General of Antiquities (DGA), Ministry of Culture, high ranked officials from   Ministry of Interior and municipalities, Ministry of Defence, IHL Directorate, Lebanese Army, Lebanese UNESCO Commission, UNIFIL Lebanon, municipal and local authorities, and others.

More cooperation initiatives will be promoted by WATCH in Lebanon and in several other countries of the region to contribute to the implementation of policies and concrete measures for the protection of natural and cultural heritage at risk.

Rome – Italy, 31 October 2019 – The 31st General Assembly of the International Centre for the Study of the Preservation and Restoration of Cultural Property (ICCROM) was inaugurated yesterday in Rome. The two-day event, held from 30-31 October, included several panel sessions, discussions and presentations on key issues relevant to the current and future challenges of cultural heritage in the Member States and the world.

Delegates from 137 Member States, as well as observers from non-Member States, intergovernmental organizations and other partnering institutions, have attended the 31st General Assembly this year with the aim to discuss and enhance the agency’s strategic directions and work plan; to review its activities for the past biennium 2018-2019; elect its new governing Council; and to welcome ICCROM’s newest Member State, Costa Rica.

Representatives of international and Italian organizations gave opening addresses at the official inauguration of the event. Dr. Eduardo Mansur, Director Land and Water Division, FAO, gave a welcoming speech in which he recognized and acknowledged the role of ICCROM in the field of conservation and restoration of cultural heritage and safeguarding the memory of mankind.

Ms. Emanuela Del Re, Vice Minister of Foreign Affairs in Italy stressed in her opening speech the strong collaboration between the Italian Government and ICCROM. “In this context, the mission carried out by ICCROM in favor of the preservation and restoration of the world’s artistic, cultural and archaeological heritage represents an added value for Italian action at the multilateral level in the field of cultural heritage protection”, Ms. Del Re said.

Ms. Anna Laura Orrico, Undersecretary of State, Ministry for Cultural Heritage and Activities and for Tourism said in her speech that we live in difficult times; in which devastating wars, climate change, catastrophic events and even the passage of time massively hit or damaged the cultural monuments and treasures in many parts of the world. “Today, more than ever, conservation and restoration activities are important and absolutely strategic: to protect and rebuild our heritage, to prevent millennial testimonies and pages of our history, from becoming irretrievably lost”, Ms. Orrico said.

In his opening speech, ICCROM’s Director-General, Dr. Webber Ndoro welcomed all guests and participants and expressed his deep thanks to the permanent support and collaboration of the host country, Italy, and all Member States, as well as local and international partners who provide a significant financial and in-kind supports, to implement the programmes and activities of ICCROM. “I particularly want to thank today the Government of Spain, through the Instituto del Patrimonio Cultural de España, for supporting the interpretation of the General Assembly into Spanish, and for committing to also translate our website into Spanish”, said Ndoro.

Dr. Ndoro also assured delegates that we are at a time when challenges are more pressing than ever as we have to considerer various threats on cultural heritage such as climate change, political, social and economic pressures. “Issues such as disasters, vandalism, looting, urban growth, and uncontrolled tourism must be faced with new answers and approaches, which must necessarily imply an integrated and intersectoral collaboration, involving people, nature and culture”, Dr .Ndoro said.

“The role of ICCROM is to take into consideration sustainable development and resilience as key elements”, Dr. Ndoro said. “For the first time, cultural heritage has been integrated in policies as part of city resilience and human rights, and this road must continue to ensure our heritage remains relevant, and properly cared for, in the future”, he added. “In these actions, each Member State will also have an important role to play. Collaboration and synergies will be the clues to ensure that the ICCROM programmes and activities can be delivered in the best possible manner, and with the required level of impact”, Dr Ndoro concluded.

The 2019 ICCROM Award was presented to Mr. Grellan D. Rourke, Senior Conservation Architect, Heritage Services for Ireland. Mr. Rourke has been engaged with ICCROM since 1981, from the time of his involvement as course participant on the Preservation and Treatment of Stone, Venice in 1981. Mr. Rourke represented Ireland at the General Assembly since 2003 and from 2005 he was Council Member.

The General Assembly also honoured the Syrian archeologist, Dr. Khaled al-Asaad, who bravely sacrificed his life while protecting the historical city of Palmyra. Dr al-Asaad spent more than 50 years of his live saving the Syrian sublime ruins and working at the site of Palmyra, before being brutally murdered by the terrorist group, ISIS in August 2015. His life and his values are an example to all, as protecting heritage paves the way for peace. To celebrate the life of Dr. al-Asaad, his son delivered a video message thanking the GA for this recognition, and underlined that without history humankind cannot have a present or future.

The General Assembly activities continued on Thursday with an important Thematic Discussion on the “Decolonization of Heritage”. Four invited speakers; Prof. Wayne Modest (The Netherlands), Prof. Shahid Vawda (South Africa), Ms. Puawai Cairns (New Zealand) and Dr. Sarah Pash (Canada); presented their views and experiences in regard to today’s challenges in decolonizing heritage, and how communities and other stakeholders can work together to confront historic injustices and ongoing inequalities, and promote the emergence of equitable heritage practices.

More information about ICCROM and its activities may be found on its website    https://www.iccrom.org/

The website is available in several languages (English, French, Italian and Arabic).

The event hashtag is #ICCROMGA31

WATCH makes an effort to secure that only objective and independent information is circulated in all its communication tools. As a result we publish only information produced by our association including: Records, Interviews, Results of research and documents produced by associate members. In addition, at times, documents produced by reliable third party organisations and experts are also published. However, may you find that incorrect information was incidentally published, we would appreciate to receive your notification at: info@eyeonculture.net
© 2007 All rights reserved.