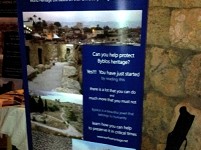 On June 25th 2012 the Byblos International Festival began and thanks to a coordination between the Council of the United Municipalities of Jbail with the Municipality of Byblos and the Festival, the project War Free World Heritage Listed Cities is active alongside this important event.

Brochures and other informative material are being circulated through the public to promote a widespread awareness on the project that is been implemented in Lebanon pointing out also the important role of each citizen for the protection of Byblos cultural heritage sites.

The Byblos Festival is one of the most important summer events in Lebanon, and it attracts thousands of visitors from Lebanon, the region and all over the world. Different dates are in the calendar this year with special guests like: Slash, Julien Clerc, B.B. King, Ute Lemper,  Kadim Al Sahir,  Snow Patrol, Tinariwen.

It is expected that around 5000 people will attend each of the Festival events’ and the project will be there to disseminate this very peculiar CIUDAD initiative as well as to inform the public about the activities still to be implemented by the project.

It is after sunset when public awareness raises the most this summer in Byblos!!!